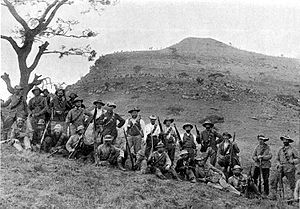 On the 24th January 1900 the Battle of Spioenkop took place, a terrible military blunder, by the British forces on their way to relieve the siege of Ladysmith in the Boer Wars of South Africa. As a direct result of this fateful battle, one side of Anfield preserves to this day the name of a conical, sun drenched and waterless hill in distant Natal.

The battle arose as British forces numbering 1700 under the command of Major-General Sir E.R.P. Woodgate marched towards the town of Ladysmith that was held under siege by the Boers. Woodgate could not advance straight onto the township without passing a row of four hills – Groenkop, Conical Hill, Spioenkop and Twin Peaks. The Boers were encamped along Twin Peaks and Groenkop and part of Spioenkop itself, and Woodgate believed that if his troops could quietly ascend one face of the Spioenkop and entrench upon the top, he would command a view of the Boer positions and direct artillery and infantry attacks into their exposed positions. 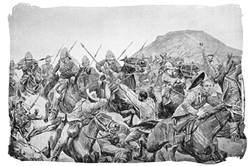 A military reporter from the Manchester Guardian understood the thinking behind the assault and outlined the Major-General’s approach for the readers back home: “If we could get on to the Southern crest of it we could probably push on to the northern end, once there we could open a flanking fire on the Boer lines which ran east and west. Spioenkop, properly used was the key that would open the door of Ladysmith. Patrols had reported that there were only a few Boers on it.” The attack commenced on the evening of Tuesday, the 23rd January.

“Soon after dusk on Tuesday a party set out to make a night attack on the hill. There were Thorneycrofts’ Mounted Infantry, the Lancashire Fusiliers, the Lancashire Regiment, two companies of the South Lancashire Regiment and a company of Engineers. General Woodgate Commanded. It was a hand-and-knee march up the southern face – a climb over smooth rock and grass. It was slow”.

Along the way a Boer sentry challenged the advancing British and he was bayoneted to death as a charge was made by the British on the Boer line –  which in fact proved to be only a tiny outpost. Maybe this caused some over confidence within the party as they steadily marched, curiously unopposed, towards the hill’s crest as night fell. A war correspondent described the events: “The crest was not reached until dawn. When dawn came the party found that it was in the clouds. 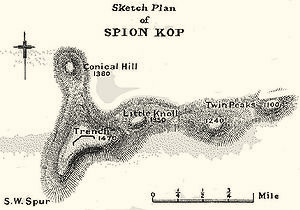 They could see nothing but the plateau – 400 yards across – on which it stood. Trenches were made but it was difficult to determine the right place for them. The Boers were invisible. At last the mist lifted. The curtain rose upon the performance of a tragedy. The Boers – need I say, on another ridge of Spioenkop – began to fire heavily, and our men seemed to have no sufficient protection in the trenches. The space was small; they were crowded together.”

The terrible miscalculation of their actual position was to prove costly. How the Major-General had lost track of the various false horizons was not recorded, but it was all too clear in the blistering light of day that things were wrong; “I will describe the scene as I saw it from below. I shall always have it in my memory – that acre of massacre, that complete shambles, at the top of a rich green gully, with cool granite walls (a way fit to lead to heaven), which reached up the western flank of the mountain.

“To me it seemed our men were all in a small square patch; there were brown men and browner trenches, the whole like an over-ripe barley field…The Boers had three guns playing like hoses upon our men. It was a triangular fire and our men on the Kop had no gun. Men must have felt that they had lived a long life under that fire by the end of the day”. The intense heat, lack of shade and water, shortage of ammunition, and the relentless shelling and sniping took its inevitable toll upon the British forces, who suffered huge casualties on that fateful day.